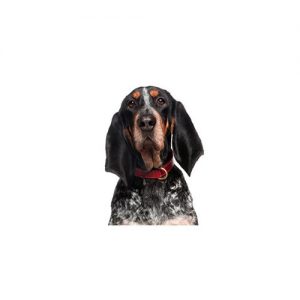 Like many coonhounds, the Bluetick Coonhound gets its name from a coat pattern, which is dark blue in color and covered in a ticking or mottled pattern. Working ability is very important to owners who prize the sturdy and athletic Bluetick for its skill in trailing and treeing raccoons and other small animals. Blueticks are known for having the typical coonhound “bawling” bark. This steady and determined breed can stay on the most intricate of tracks, making it a prized companion for active sporting families.

The Bluetick Coonhounds color suggests that it descended from the Grand Bleu de Gascogne (French Staghound) as well as the English Foxhound. In America, Blueticks were referred to as English Coonhounds for many years. In 1945, however, Bluetick breeders broke away from the English breeders because they didn’t want to follow the trend toward producing a hot-nosed, faster hunter. Proud of their larger, cold-nosed and resolute, if slower hounds, they re-named their breed and maintained their own hunting style.

Athletic and hardy, Blueticks are working dogs that need a job such as hunting, obedience or agility to stay happy. Their short, glossy coat requires only occasional baths and brushing.